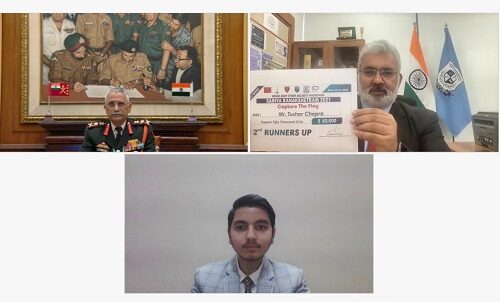 Darshan Academy, Delhi congratulates Tushar Chopra, class XI-A, for his outstanding achievement during the Sainya Ranakshetram, the Indian Army’s annual cyber hackathon organised by Rashtriya Raksha University, Ministry of Telecommunication Engineering and ISAC India.   He participated in the Capture The Flag category, scoring the 2nd runner-up position out of 51,000 participants all over India, receiving a 50,000 cash prize and a certificate from the Indian Army. Along with many lieutenant colonels, Indian Army Chief General MM Naravane was present for the prize distribution ceremony. It’s indeed a proud moment for every one of us to hear his name announced in the presence of an august gathering. You deserve the applause, Tushar, for being selected amongst the 51000 participants and honoured by such dignitaries. Thanks to Ms.Indu PGT Computer for being his mentor.

Darshan Education Foundation has been providing students with an excellent all-round education since the inauguration of its first school, Darshan Academy Meerut, in India, in 1995.

This website uses cookies to improve your experience while you navigate through the website. Out of these, the cookies that are categorized as necessary are stored on your browser as they are essential for the working of basic functionalities of the website. We also use third-party cookies that help us analyze and understand how you use this website. These cookies will be stored in your browser only with your consent. You also have the option to opt-out of these cookies. But opting out of some of these cookies may affect your browsing experience.
Necessary Always Enabled
Necessary cookies are absolutely essential for the website to function properly. This category only includes cookies that ensures basic functionalities and security features of the website. These cookies do not store any personal information.
Non-necessary
Any cookies that may not be particularly necessary for the website to function and is used specifically to collect user personal data via analytics, ads, other embedded contents are termed as non-necessary cookies. It is mandatory to procure user consent prior to running these cookies on your website.
SAVE & ACCEPT